“2021 was truly a transformational year at Hut 8, complemented by considerable growth,” said Jaime Leverton, CEO of Hut 8. “In pursuing a diversified strategy, we have differentiated ourselves from our peer group and in doing so, have become the only company in North America to both mine digital assets while building on our traditional infrastructure business to support companies in Web 3.0 and the Metaverse.”

“Achieving sizable improvement across key financial and operating metrics in fiscal 2021, we delivered record breaking results for our shareholders,” said Shane Downey, CFO of Hut 8. “We continue to have one of the largest self-mined Bitcoin reserves in the world, currently holding more than 6,200 Bitcoin, and look forward to driving operating efficiencies at our mining sites by deploying next-generation miners.”

On December 31, 2021, Hut 8 had an installed hashrate of approximately 2.0 EH/s, which includes the converted hashrate from our fleet of NVIDIA GPUs. The hashrate increased to 2.5 EH/s by February 28, 2022.

The Company’s current capacity stands at approximately 3.55 EH/s once all the ordered miners are received and deployed, which includes the converted hashrate from our fleet of NVIDIA GPUs.

As of December 31, 2021, the Company had a total Bitcoin balance of 5,518 with a market value of $323.9 million, including 2,000 Bitcoin loaned as part of the Company’s fiat yield strategy. Hut 8 continues to strategically emphasize its “HODL” strategy, taking active steps to generate Canadian and US dollars to help fund operating expenses, while avoiding selling Bitcoin. During Q4-2021, 100% of self-mined Bitcoin was deposited into custody. 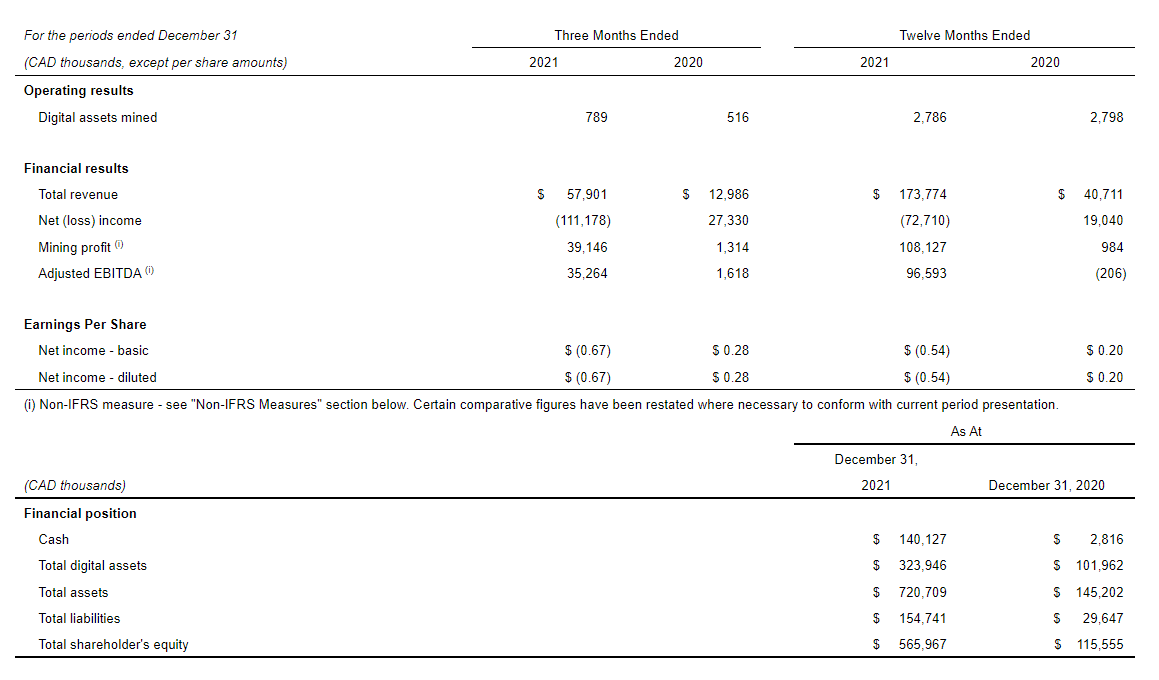 This MD&A makes reference to certain measures that are not recognized under IFRS and do not have a standardized meaning prescribed by IFRS. They are therefore not necessarily comparable to similar measures presented by other companies. The Company uses non-IFRS measures including “Adjusted EBITDA” and “Mining Profit” as additional information to complement IFRS measures by providing further understanding of the Company’s results of operations from Management’s perspective. 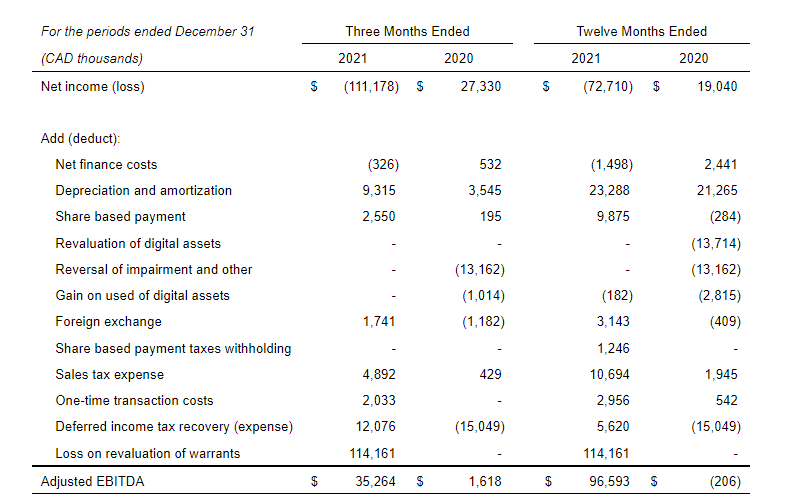 Hut 8 Mining Q4 conference call will commence at 10 a.m. ET, today, March 17, 2022. Those wishing to join via telephone should dial in 5 minutes early to the number below:

A full list of Hut 8 Mining analyst coverage can be found here.

Hut 8 is a digital asset mining company with industrial-scale operations in Alberta, Canada. The Company is one of North America’s largest innovation-focused digital asset miners, supporting open and decentralized systems since 2018. Located in energy rich Alberta, Canada, Hut 8 has one of the highest installed capacity rates in the industry and one of the largest holdings of self-mined Bitcoin relative to other digital asset miners and publicly traded companies globally. Hut 8 is executing on its strategy of mining and holding Bitcoin, while building a diversified business and revenue strategy to grow and protect shareholder value, regardless of Bitcoin price action. The Company’s multi-pronged business strategy includes profitable digital asset mining, white-label high-performance compute hosting, as well as yield & income programs leveraging its Bitcoin held in reserve. Having demonstrated rapid growth and a stellar balance sheet, Hut 8 was the first publicly traded miner on the TSX and the first Canadian miner to be listed on The Nasdaq Global Select Market. Hut 8’s team of business building technologists are believers in decentralized systems, stewards of powerful industry-leading solutions, and drivers of innovation in digital asset mining and high-performance computing, with a focus on Environmental, Social and Governance (“ESG”) standards alignment. Through innovation, imagination, and passion, Hut 8 is helping to define the digital asset revolution to create value and positive impacts for its shareholders and generations to come.